You Cast Down Others?

It is unwise to judge others for many reasons including the uncertainties of our own destiny. True, we know where we have been, but do we really know where we are going (destiny)? JonAk TiwerAndFlights/AmericaOnCoffee

There us sn old proverb: “You can’t understand someone until you’ve walked a mile in their shoes.”

The Gospel of John 7:53–8:11, that has been the subject of much scholarly discussion.

In the passage, Jesus has sat down in the temple to teach some of the people, after he spent the previous night at the Mount of Olives. A group of scribes and Pharisees confront Jesus, interrupting his teaching session. They bring in a woman, accusing her of committing adultery, claiming she was caught in the very act. They ask Jesus whether the punishment for someone like her should be stoning, as prescribed by Mosaic Law. Jesus first ignores the interruption and writes on the ground as though he does not hear them. But when the woman’s accusers continue their challenge, he states that the one who is without sin is the one who should cast the first stone. The accusers and congregants depart, leaving Jesus alone with the woman. Jesus asks the woman if anyone has condemned her. She answers that no one has condemned her. Jesus says that he, too, does not condemn her, and tells her to go and sin no more.

Here is another paraphrase:

John.8. [1] Jesus went unto the mount of Olives. … But Jesus stooped down, and with his finger wrote on the ground, as though he heard them not. [7] So when they continued askinghim, he lifted up himself, and said unto them, He that is without sin among you, let him first cast a stone at her. 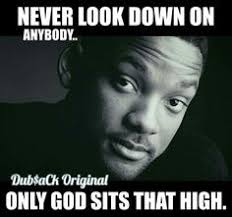 Seeing the sinful state of another and not condemning this sinner, gives the bigger opportunity to pray for the person.